The cover of this novel (designed by Marcos Viñals Bassols), whose title means "money" in Lingala, shows a mooring post circled with a heavy chain. The image illustrates the story at several levels: it evokes first the slave trade and the Middle Passage. In the narrative, unfolding in 1920s, the indigenous people who have flocked to Kinshasa to find work recognize that they are newly enslaved to and by the money economy brought by the Europeans. The work they do is exhausting, often humiliating, yet it serves only to sharpen their appetites for the merchandise offered in the European-owned stores. They become doubly the source of capital accumulation for Western countries, providing low-cost labor and spending the little they earn at the European-owned shops.
A reccuring theme of tradition versus intergration with Western values begins with dispute between the central figure of the novel, Gikwa, and a woman who has given him and his wife hospitality in Kinshasa until he finds work. With his first work, Gikwa feels the need to dress ostentatiously, manifesting this euphoric possession of "mbongo". To his traditionnal mode of thinking, Makpénza's helping hand was simlply fraternal hospitality: now she should rejoice in his new clothes and dignified appearance. Makpénsa's interpretation is at a business level: Gikwa's duty was to come immediately to offer her payment for the food she his providing (104). Outraged and offended by her boarder's egoism, the "hostess" determines to settle the score by seducing Gikwa's bride into the lucrative profession of prostitution of which she is something of a union leader. Gikwa is an Oubangui prince tempted by the novelty of Western clothing to abandon his village life. He maintains paradoxically both his pride and indigenous noble and his hunger for material life. However, Kinshasa is too strong for him. His epiphany comes when he is being beaten into submission in the prison: he breaks and cries for the father he has heartlessly abandoned.
Rather than character development, Tchibamba's focus is on creating a linguistic world consisting of italicized French pronounced à la Lingala, and deformations of the English or Portuguese of the coastmen. One of the novel's most fascinating characters, the écrivain-pointeur in the company where Gikwa finds work, represents another linguistic phenomenon. Educated in Protestant schools, he speaks an impeccable, flowery French that allows him to mock the brutal Polish manager of the loading dock, and "rewrite" instructions to the workers through his lofty translations. Through this relationship Tchibamba demonstrates in almost caricatured dimensions the difference between the racist and often sadistic attitudes of the Whites, who came bringing their mission civilisatrice, and the talents and resilience of their "pupils". However eloquent or capable this class of African, the Europeans refuse them respect and dignity. Nevertheless the reader appreciates the irony of Tchibamba's virtuoso French and his clerck's outwitting of the "civilisateur". The author has jollified the verbal skirmishes between the manager and his clerck with some well-placed pratfalls on the part of the manager even es he tries to impose his authority.
Tchibamba has not spared scatological details as a metaphor for the White's attempt to dehumanize the indigenous people. On the last pages of the novel we accompany the prisoners through the night, forced to clean the latrines of colonial residences. Thus the "fall" of Gikwa, imprisoned, beaten and bathed in excrement contrasts with the "triumph" of his adolescent wife, one of the most sought-after prostitutes in the city. Judging the central role held by prostitution in the world dominated by "mbongo", the narrative voice speaks directly, in a sentence that evokes once more the image on the cover: these women thinking themselves emancipated, have sold themselves into slavery not just to one man, but to every man (263).
Suzanne Gasster Carrierre
avril 2009 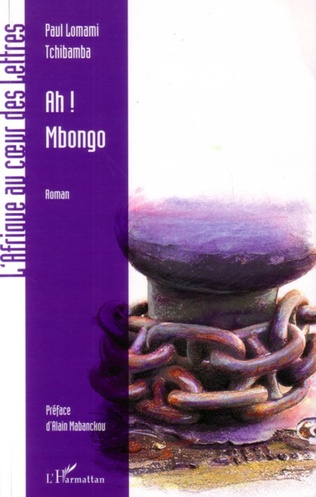